Skip to content
By: Harmony Cardenas Posted on July 1, 2022

There were shocking scenes at the venerable Tefaf fair in Maastricht as a man with a sledgehammer smashed the glass-lined booth of the ultra-high-end jewellers Symbolic & Chase soon after the fair had opened on Tuesday morning. The offender was in a group of four well-dressed men, at least one of whom was witnessed carrying a gun, who stole unspecified items from the stand. The Limburg district police confirmed that two men — aged 22 and 26, both from Belgium — were arrested soon after the theft in a getaway car, while the search for the other suspects was ongoing on Tuesday afternoon. There was no update on whether the stolen property had been retrieved.

A short holding statement from Tefaf included that nobody was injured during the incident. “Tefaf and the MECC [convention centre] are now working with the authorities,” it concluded.

The fair was evacuated and closed for about an hour, a process described by one exhibitor as “well handled”, though they were not expecting the morning’s visitors to return. Another remarked that the destructive incident “is the last thing this fair needed”. The event, postponed from its usual March slot to June 24-30, is Tefaf’s first in-person outing since 2020, when the spread of Covid-19 through its aisles forced early closure. Business had been reassuringly steady until the armed robbery, and the fair has confirmed that it will be move back to March next year — presumably with reinforced security.

The Rennie Collection, a Vancouver private museum that houses art belonging to the real estate businessman Bob Rennie, has bought Kehinde Wiley’s complete new series The Prelude (2021), valued at about $5mn. The five paintings and one immersive, six-channel film were recently shown at London’s National Gallery, described as “a public platform unlike any other” by Wiley’s gallerist, Stephen Friedman. 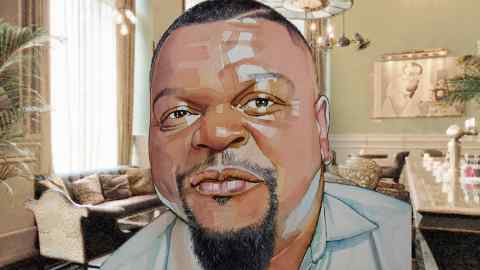 The Nigerian-American artist is a market darling and shot to worldwide attention when he was chosen to paint the 2018 official portrait of former US president Barack Obama. In The Prelude, Wiley introduces black figures within well-known landscapes by western Old Masters such as Caspar David Friedrich and Théodore Géricault. Rennie says that the works speak to his collection’s “overriding thread” of social justice and that, when it comes to racism, “museums can, and should, take on these tough and very necessary conversations.”

The auctioneer and art dealer Simon de Pury is launching an online auction series aimed at the artists and their representing galleries who often miss out on high-value secondary market sales. “If a gallery has a new body of work by an in-demand artist, they might want to cash in on some of the demand and consign one or two pieces to auction,” de Pury says.

His auctions, on the existing de Pury platform, will stipulate that buyers hold their works for a minimum of three years, limiting the speculation that can disrupt an artist’s natural trajectory. Hammer price proceeds will be split between the gallery and artist, according to existing arrangements, and de Pury will charge an 18 per cent buyer’s premium — below the typical 20-25 per cent at the big auction houses. Each sale will donate 3 per cent of this premium to a charity.

The first auction is of recent works by about 15 female artists, including Chloe Wise and Alexis McGrigg, both represented by Almine Rech gallery. The sale will be on view online from August 5 and will be conducted live on August 25 by an avatar of de Pury.

Hats off to the Copenhagen collector and private museum owner Jens Faurschou who on Tuesday bought Jeff Koons’s “Balloon Monkey (Magenta)” (2006-13) for £8.6mn (£10.1mn with fees). The shiny sculpture, shown to its best effect in London’s St James’s Square in the run-up to the auction, was donated by Ukrainian collector couple Victor and Olena Pinchuk, to benefit humanitarian charities in their home country.

Christie’s also contributed a “significant portion” of its premium to the cause, a spokesperson confirms, taking the total donation to near £10mn. Faurschou described his purchase as a “double joy” and urged “we celebrate these vital charitable initiatives from the art world — and we need more”.

Pace gallery has added 1,500 sq ft to its gallery in Seoul, taking on the ground floor space in the Le Beige Building where it opened 8,500 sq ft last year. The new room has blackout curtains and speaker ports, “specially equipped for experiential, immersive, and interactive artworks”, a statement says. The expansion underlines the influence that Frieze’s forthcoming fair in Seoul is having on the region, as the international art trade looks to diversify business in Asia beyond Hong Kong. This week, the fair announced its 110-plus exhibitors for its September 2-5 fair in Seoul, including 18 in a Frieze Masters section for pre-contemporary art and a focus on young galleries from Asia.

Coinciding with the fair, Pace will host the collective teamLab in its new room while its main space will have new works by the contemporary Romanian painter Adrian Ghenie. The gallery will also open a tea house in the building, adjacent to an outdoor space for sculpture and other installations.

Bonhams has bought the Paris auction house Cornette de Saint Cyr, its fourth regional auction house acquisition since the start of this year. The deal, for an undisclosed sum, includes Cornette de Saint Cyr’s space in Brussels and means that Bonhams has grown its sale rooms from eight to 14 in the past six months, with staff numbers up from nearly 700 to more than 1,000.

“We want to be the world’s local auction house,” says Bruno Vinciguerra, Bonhams chief executive. Digital innovation and efficiency are key, he says, while its target auction houses must have “high value relationships in their respective markets.” The private-equity-owned group remains in active acquisition mode. “There are great opportunities to consolidate in an extremely fragmented market,” Vinciguerra says.