Skip to content
By: Harmony Cardenas Posted on March 25, 2022 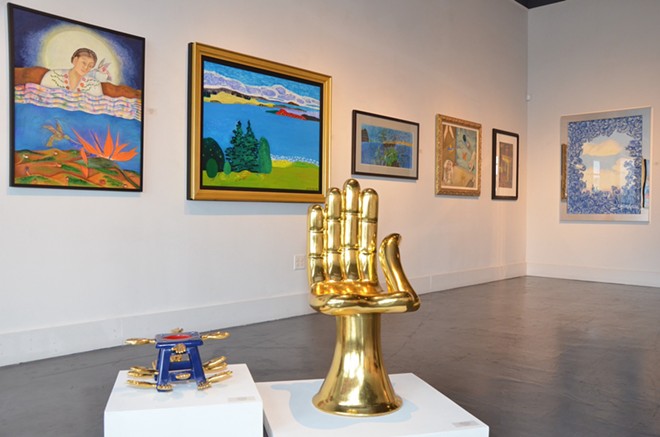 As with any artistic movement, surrealism had its proponents, dabblers and detractors — and Kahlo fell within a complicated space. Some of her most famous works skewed surreal, and she participated in movement leader André Breton’s International Surrealist Exhibition in Mexico City in 1940. Yet she didn’t consider herself part of the movement.

“They thought I was a surrealist, but I wasn’t,” Kahlo once asserted. “I never painted dreams. I painted my own reality.”

In certain ways, surrealism paved the way for its younger cousin magic realism, which presents fantastical occurrences as common aspects of everyday life. Both evolved from a literary tradition into a distinct style that’s loaned itself to painting, film and other forms of visual expression.

On view through April 23, the new Ruiz-Healy Art exhibition “Neo-Surrealism & Magic Realism” explores the diverse applications of these two genres along with contemporary adaptations and gray areas in between.

During a recent Zoom conversation, gallery director Patricia Ruiz-Healy explained that the exhibition sprang from her desire to showcase two late San Antonio artists, Katie Pell (1965-2019) and Bruno Andrade (1947-2013). Although stylistically disparate, they both alluded to fantasy in works driven by nature and memory. With those two bookends in place, “Neo-Surrealism & Magic Realism” developed organically into a 17-person show that speaks eloquently to the stranger-than-fiction realities of our times. 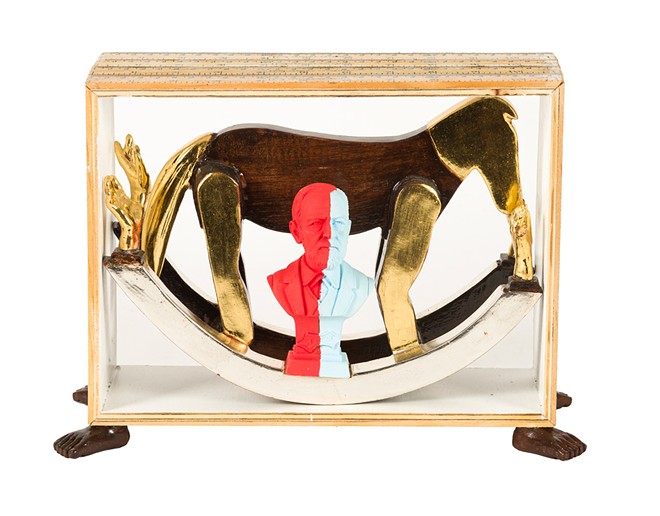 Pedro Friedeberg nods to the father of psychoanalysis with his 2021 sculpture Homenaje a Sigmund Freud.

Hailed as “one of the most celebrated living artists in Mexico” and “one of the master illusionists of late 20th-century art,” octogenarian Pedro Friedeberg is arguably the second most recognizable figure in the exhibition — the first being a gilded example of the ubiquitous Hand Chair he introduced in 1962. As Architectural Digest reported in its 2017 article “The Story Behind Pedro Friedeberg’s Iconic Hand Chair,” that functional staple of modern surrealism has achieved cult-like status in global design circles. But it’s only the tip of the iceberg for Friedeberg, who works between sculpture, painting, printmaking, montage and installation — and remains incredibly prolific to this day.

“He works all the time,” Ruiz-Healy said of Friedeberg. “He’s just happy drawing and creating … and he has this incredible discipline.”

Positioned near the gallery entrance almost as a welcome sign into “Neo-Surrealism & Magic Realism,” Friedeberg’s Hand Chair delivers a master class in continuity as it sits next to his Tercer Banco — a complementary but much less accommodating seating device he devised nearly 60 years later.

“Pedro was very close to Leonora Carrington, and to Bridget Bate Tichenor, another big surrealist who lived in Mexico,” Ruiz-Healy explained. “He doesn’t like to say, ‘I’m a surrealist,’ but he does recognize that surrealism has played a big role in his work.” 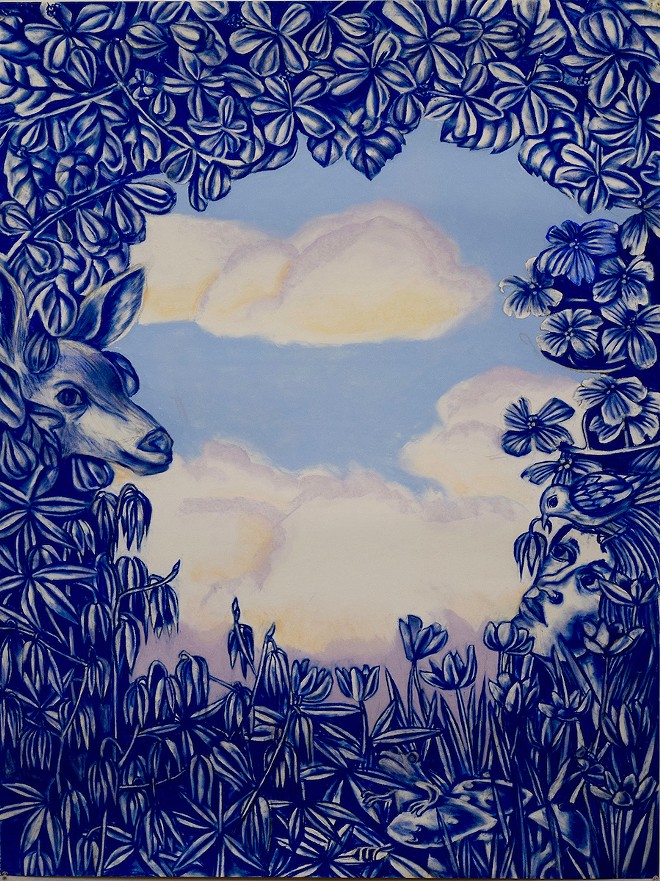 Katie Pell’s mixed-media drawing Waiting for You offers a window into another dimension — or perhaps an artsy selfie setup.

After succumbing to the unavoidable pleasures of Friedeberg’s golden oddities, viewers’ eyes will likely wander to Katie Pell’s Waiting for You. Exemplifying Pell’s love of nature — which took shape in imaginative homages to the Delaware woods of her adolescence — the mixed-media piece beckons with a mix of flora and fauna flanking cloud patterns that recall both Magritte’s masterworks and the opening credits to The Simpsons. Driven home by a mirrored plexiglass frame, Waiting for You can be taken as an invitation into an alternate dimension or, as the title wryly implies, a conceptual selfie scenario.

Thoughtfully included in the exhibition’s press release, Pell’s words describe her work in a manner all her own: “Some of us build our own mythology out of our environment, our desires, and our own furious defiance at our genetic mediocrity. I hope my work can ignite or describe the excitement of our pointless and forgettable lives, and reaffirm the value of our gorgeous desperation.”

A San Antonio native who found major art-world success and taught for 20-plus years at Texas A&M University in Corpus Christi, Andrade created exuberant paintings that drew from nature, memory and his Chicano heritage.

“I have always been very intrigued by his work,” Ruiz-Healy admitted. Characterized as both “a realist with a refined sense of abstraction” and “a sophisticated painter inoculated with the wonder of an eccentric visionary,” Andrade is represented here with the joyful still life Into Memory and the dreamy landscape Apple of My Eye. While he may not be a household name in these parts, Japanese-Mexican artist Shinzaburo Takeda is considered a master printmaker and his influence resonates through the work of the many young artists he’s taught in his home state of Oaxaca. With its muted color palette, Takeda’s 2010 print Mujeres de Mayo may not scream for attention as loudly as some of its neighbors but it’s unusual subject matter — which places a towering crocodile at the helm of a ship being pulled through the water by horses — renders it one of the most surreal works in the show.

“He’s a perfect magic realism artist as well,” Ruiz-Healy offered. “All his works are based on travels. He knows Oaxaca and Mexico so well and he goes to these very remote areas and documents [what he sees]. A lot of his paintings, you might think they’re part of his imagination. But no: they’re for real — obviously, not the crocodile.”

Often placing borderland themes within the surreal realm of science fiction, San Antonio-based Mexican artist Juan de Dios Mora is another natural fit and his 2009 print Partido en Dos (Torn in Half) delivers one of the show’s most poignant moments. Depicting a listless kid at odds with his broken accordion, it speaks to “a life spent straddling two worlds.”

But the feels don’t stop there. The day after “Neo-Surrealism & Magic Realism” opened, Mora posted a photo of Takeda’s Mujeres de Mayo with the following caption: “In a million years I never thought that I will be showing my art right next to a maestro which I admire. … Thanks @ruizhealyart for making my dream come true.” 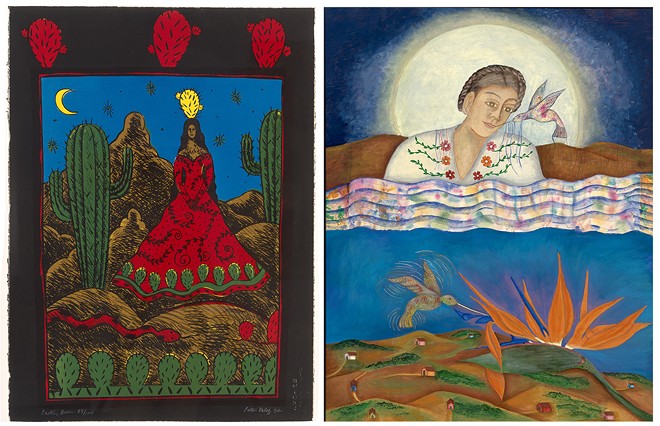 Although Nobel Prize winner Gabriel García Márquez is often hailed as the “father of magic realism,” Ruiz-Healy pointed out that Cuban novelist Alejo Carpentier came first with his theory of lo real maravilloso, a fantastic spin on reality he found to be inherent to Latin America — and decidedly different from European constructs of surrealism.

That spirit comes across most clearly in Ruiz-Healy’s pairing of Irma Guerrero’s 2004 painting Viento y Agua (Wind and Water) and Patssi Valdez’s 1992 print Cactus Queen. While Guerrero employs hummingbirds and a majestic bird of paradise flower to hint at the magic of the natural world, Valdez crowns her queen with a cactus paddle amid a mountainous landscape punctuated by a bright red snake.

“I love that piece,” Ruiz-Healy said of Cactus Queen. “A lot of people think that we’re just now recognizing Brown [artists]. And it’s not [the case]. Look at Patssi: she chose to represent this beautiful woman as a queen — and she’s Brown. … That’s why the work of César Martínez and Patssi Valdez and Mel Casas is so important — because they were the pioneers in this country of recognizing their own identity, their own culture.”

Get our top picks for the best events in San Antonio every Thursday morning. Sign up for our Events Newsletter.